As I sit here having my Recover, enjoying a fall-like morning, I decided to write down some of my thoughts regarding my fitness journey over the summer.  It was too long for Facebook, so I decided to give the blog a try again. 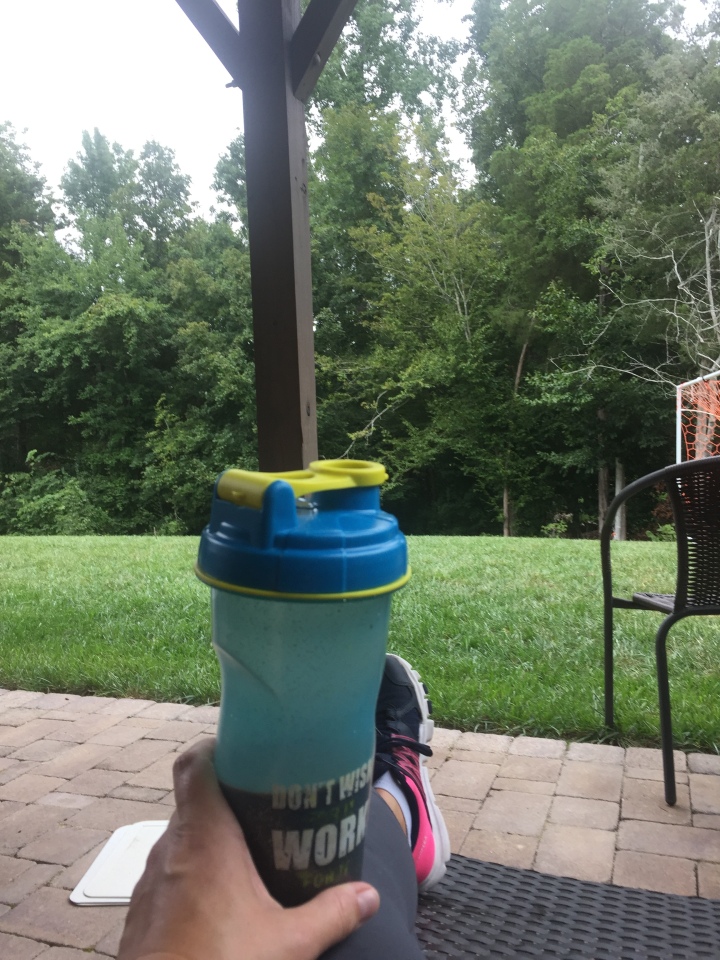 I just finished another round of Hammer and Chisel, and to be honest, I loved it, even more than the first time I did it.  I don’t LOVE cardio in a traditional sense, so anything that can burn calories and increase endurance without feeling like straight cardio is a good thing for me.  I lost exactly….ZERO pounds.  I didn’t take measurements but I probably lost a little in my waist, not much.  However, sometimes no progress is some progress.  This was re-emphasized to me as I logged back on and realized it was two years ago I began my blog and about 2.5 years ago that I started my weight loss journey…again.

You see, I’m one of the weird people that GAIN weight during the summer.  Between vacations, kids being home and more relaxed, making treats, going on vacation, baseball tournaments where we eat out all weekend, the diet just isn’t perfect, and while I still usually get at least 4 workouts in, sometimes I can’t get all 5-6.  Last summer, this led to me gaining some weight back.  Then I started to lose it over the fall and winter, slowly.  Then come spring time…it’s been the same.  But compared to a year ago even, this is improvement, for two main reasons.

2- More importantly, I did eat healthier, not always, but mostly.  And I WANTED to. Like I craved vegetables.  I FEEL BETTER when I fuel with good food.  And, when I did have a treat, I had what I wanted.  And listened and ate only enough to enjoy that treat.  I indulged, but I didn’t over-indulge.  And I DIDN’T FEEL GUILTY about it.  Before I would either not eat a treat because I still needed to lose weight, or if I did, I would start to feel bad, think I was doomed to never lose weight, and get a little more off track than I should have.  So the fact that I didn’t really THINK about food other than wanting veggies over the summer, well, it was a good thing.

The rest of this week will probably be pretty light as we head to the beach for one last summer weekend before I can really pretend it’s fall.  I’m definitely going to be doing A Week of Hard Labor with Sagi when I get back, but after that, I’m not quite sure yet.  Stay tuned…

My journey with Beachbody technically goes back to college.  I’ve done Tae Bo, Turbo Jam, Yoga Booty Ballet, P90X, tried Insanity once and barely made it through the warm up 😉  However, my recent dedicated Beachbody Journey really starts in January 2014.

January 2014-I had gained some weight over the past year or two due to lack of working out and stress eating while moving and going through a hard time at work.  However, I also had just had my IUD removed to try for baby #3, so I thought I will try to be healthy while pregnant and really lose the extra pounds afterwards like I had done before.  Unfortunately my cholesterol is elevated, and I have a family history of early heart disease, so this is not good.

February 2014- my Aunt dies from complications from the flu.  Not two days after we get back from her funeral, I get the dreaded middle of the night call.  My step father calls saying my mom had gone to the emergency room, her heart had stopped, they had her on medicines and a breathing machine and were transferring her to the tertiary hospital 20 minutes away but they weren’t sure if she was going to make it. I spent most of the next 3 weeks down in Louisiana at the hospital but thankfully my mom improved and made it home.

May 2014- miscarriage.  Even though it was early, I was more devastated than I could have imagined.  Then for the next seven months, month after month of trying and waiting and being disappointed.  I didn’t exercise, I ate too much, I didn’t sleep, I was stressed.

December 2014- see OB, bloodwork confirms I am not ovulating, we try one cycle of Femara unsuccessfully.

January 2015- I was unhealthy mentally and physically.   I needed a change.  Enter the wonderful Shannon Dew, the insane Shaun T and T25.  I also did PiYo and started drinking Shakeology and following a mainly clean diet.  Over the next 10 weeks, my health improved drastically. And I was happier, more productive and sleeping better.   I participated in my coach’s accountability and challenge groups.  On my own, I’m sure I would have given up.  But I had found a supportive group of people that were all dedicated to getting and staying healthy.   I decided to further push it and start P90X3.  All  3 of the programs I chose because they were 30ish minutes or less and I figured even I had time for that.   After 5 months I had lost 20 pounds and felt great.  Just a month in my LDL had already dropped 30 points, though it still has some more room to go down.

May -July 2015- more cycles of Femara, monitoring shows I’m not responding to the medication and will likely need IUI or IVF.  I had slacked off on exercise and the old stress eating habits were returning.  I have gained back about 6 of the pounds I had lost.  So, I have decided before making a decision on the fertility treatments, I want to get back on board full time with my fitness.  Since I’ve already been using Beachbody so much I realized it was past time I become a coach.  I’m mostly doing it to help myself but if I can help even one person like my coach helped me, then it will all be worth it.